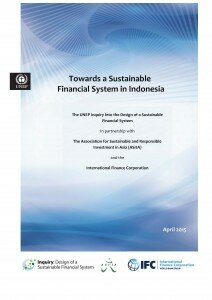 Indonesia Country Report
Towards a Sustainable Financial System in Indonesia

Placing Indonesia’s economy onto a green and sustainable development pathway, as envisaged in the National Long Term Development Plan, will require a large mobilization of investment. Estimates of the annual investment needed are in the order of US$300‐530 billion, with a large portion of this investment needed in critical infrastructure, as well as environmentally sensitive areas such as agriculture, forestry, energy, mining and waste. In addition, financing for SMEs and industry is critical for creating jobs and boosting productivity.

Today, the majority of banks, as well as non-bank-financial institutions do not consider environmental, social and governance factors in their lending or investment process as a main consideration. However, Indonesia’s financial markets have seen a number of important design innovations over the past years aimed at encouraging green lending and investment, such as the development of sustainability ratings in its rapidly growing stock marke. Furthermore, the Indonesian Government has begun to take steps to green some aspects of the financial system. In December 2014, OJK, the financial services regulator, launched a Roadmap for Sustainable Finance in Indonesia, which lays down a comprehensive work plan for promoting sustainable finance for the period 2015-2019. The Roadmap will constitute an integral part of OJK’s Master Plan for Indonesia’s Financial Sector. Despite being at an early stage, the Roadmap is unique internationally as a systematic plan grown out of a decade of development of sustainable finance in Indonesia. As part of this Roadmap OJK might develop a binding regulatory framework for green finance which, among others, could include the establishment of compulsory environmental and social management systems and associated reporting in both banking and capital markets.