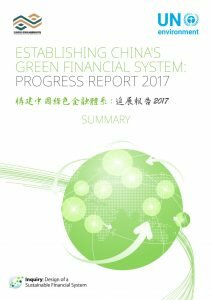 The report finds that China – which put green finance on the G20 agenda during its 2016 presidency – is following through on its political commitment to boost the financing required to do this. The report looks particularly at progress since the State Council in August 2016 approved a set of recommendations for action on greening China’s financial system.

The report identifies many specific advances, including: