On 18 September 2017 the Secretary-General of the United Nations (UN) António Guterres stressed the role of the UN to help reshape “unproductive and unrewarding” finance and redirect investment to creating a better world for all. At the Financing the 2030 Agenda event held at the UN Headquarters in New York, Mr. Guterres stated, “The choices we make on finance will be critical”.

Speaking at the event, Gabriela Michetti, Vice President of Argentina added, “the 2030 Agenda is a global goal to eradicate poverty, that is only possible through sustainable economic growth and quality employment for all. The link between the sustainable development agenda and the work of the G20 is therefore vital and important.” She went out of her way to highlight the importance of integration and cooperation in the international development arena.

Macharia Kamau, Permanent Representative of Kenya to the UN, said the UN will be unquestionably be the organization to help developing countries achieve the goals of the SDGs and emphasized that now was the time to act if we wanted to secure the future.

Today’s global financial system, which manages some $300 trillion in financial assets, is simply not fit for purpose, the UN chief said, recalling that the Addis Ababa Action Agenda, adopted in 2015 at an international conference in the Ethiopian capital on financing for development, highlights the importance of being innovative in leveraging resources and financing for development. The UN’s three-part strategy for enhancing its support to financing the 2030 Agenda would help achieve short- and medium-term results, he said.

The Secretary-General said that he will lead UN efforts to ensure that the objectives of the 2030 Agenda are fully reflected in international economic and financial policies by working closely with key inter-governmental platforms, such as the G20.
Second, he will reform the UN development system to strengthen its country teams, and third, he will champion key international initiatives that can harness large-scale changes in financing and financial system development, such as in the fields of digitalization and climate finance and in cooperating with major investment initiatives.

Lucy Peng, Executive Chair, Ant Financial, spoke about how technology will the major source of inclusive growth. She spoke at length about Ant Financial’s work, which helps small and medium-sized enterprises (SMEs) to obtain financing online in mere seconds by only showing good credit. One major idea she put forward at the event to accelerate the progress of the 2030 Agenda and the SDGs was the formation of a digital finance working group.

Also addressing the event was Deputy Secretary-General Amina Mohammed, who said that trillions of dollars need to be mobilized a year by tapping into the savings of citizens around the world, official development assistance (ODA), domestic financing and the world’s financial system. 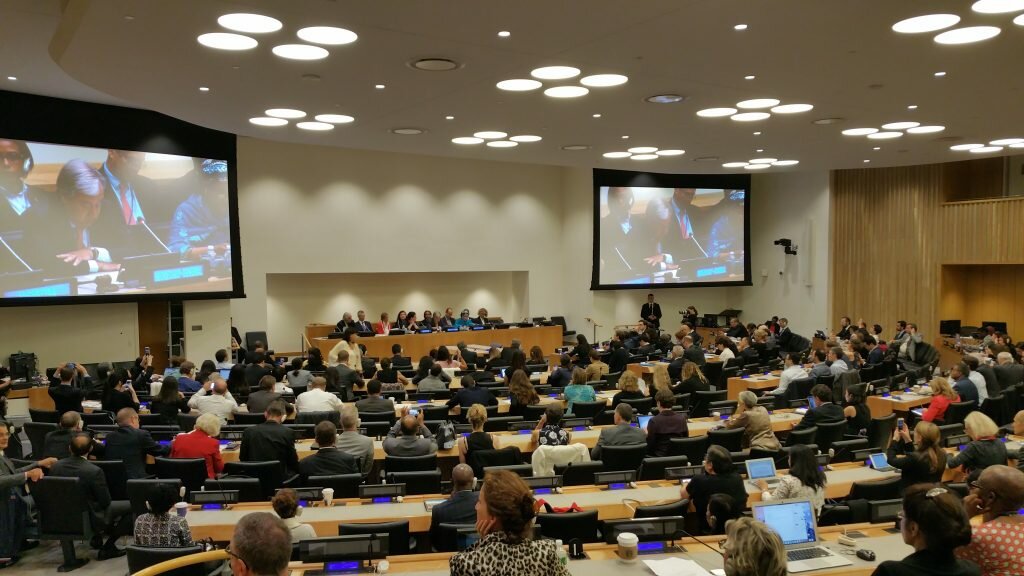 The UN has always been engaged in this financing agenda, with its partners, allies and of course Member States, but “our question is whether we are doing enough, and the answer, in short, is no,” she said, explaining that this event is timely as it highlights progress and opportunities from parts of the UN’s leadership team, key partners such as the World Bank, private sector actors, and Member States.

Achim Steiner, Administrator, UN Development Programme (UNDP), observed that, “the challenge right now is to understand that the SDG’s are in fact something that is not only relevant but an immense opportunity also for financial markets and those who administer and look after our funds”. He also went on to talk about how we would work towards de-risking future investments.
CEO of the World Bank, Kristalina Georgieva, spoke about finding funding for those who need it the most while also stating that International Development Association will be used to leverage even more funding from private sources. She also said, “If we have trillions in the financial system someone has to wake this money up”.

Christiaan Reebergen, Director-General for International Development, from the government of the Netherlands said, “It’s not all about investing in sustainable investments in the Netherlands, it’s about investing 3.5 billion euros annually in the inclusive financial sector in developing countries,” as he spoke about possible ways to turn words into action when trying to tackle the financing gap in relation to the 2030 Agenda.

Liu Zhenmin, UN Under-Secretary-General for Economic and Social Affairs added, “we all recognize that public finance is essential to financing public goods at the heart of sustainable development. National tax systems need to be strengthened and international tax cooperation needs to be stepped up.” On private finance, he said he would advocate within the G20 for the 2030 Agenda and work with international financial institutions (IFIs) to strengthen mechanisms for leveraging private finance.

Courtenay Rattray, Permanent Representative of Jamaica to the UN, mentioned the innovative idea of diaspora bonds and debt for climate change swaps while striking a cautionary note that that often development outcomes do not necessarily follow financial inputs.

California Financial Controller Betty Yee noted, “working to make the 2030 Agenda a reality will be hard work, requiring cooperation and financing strategies,” while also going to say that she looks forward to the UN’s leadership on the issue.

Financing is fundamental to the successful implementation of the 2030 Agenda for Sustainable Development and the Paris Agreement on climate change. Progress is being made however far great levels are required to realise the goals.